McLaren Park is the second largest San Francisco city park. Yet it remains a secret to most San Franciscans, in a part of the city most have yet to visit. The park’s remoteness and location on a hilltop allows McLaren to retain an unusual character for such a built up city; much of the park feels ‘wild’.

The park was dedicated in 1927 after a city-wide campaign to create it. The first wave of improvements date back to the 1930’s, when the WPA era built trails and planted trees. In the 1950’s the park’s boundaries were finalized, incorporating what was agricultural land. In the 1970’s, the Rec and Park department built a BMX race track in the park and ran races every year. The paved path system you see at McLaren today was added in the 1980s to provide several loop options through the park and link it to the neighborhood. In the 1990’s, the movement to preserve rare Natural Resource Area city-wide ramped up and many areas in McLaren park were identified for their value. In the late 2000’s into the early 2010’s, the Philosopher’s Way was added to the park, using both existing trails (both historic and user-created) and building new ones. The Philosopher’s Way was designed as both a trail and an art project, providing a route to several spots designed as a location to pause for thought or to take in a particular view, and often includes historical information about the neighborhood or nature in that spot. In addition, all of the new segments were designed and built to best practice multi-use standards, many with the assistance of SF Urban Riders.

SFUR has also brought several community events to McLaren Park, hosting Take A Kid Mountain Biking Day from 2009-2011 and the SF Mountain Bike Festival/McLaren Short Track Challenge in 2013-2014. In addition, the new McLaren Bike Park project was initiated by SFUR in 2011, then continued by the McLaren Bike Park Founders shortly after, and is about to open this month (October 2017). We have continued to do volunteer projects in McLaren park, and plan to continue that in the future.

McLaren Visioning Plan – Trails Component
Recently, the Recreation and Park Department went through another planning process: The McLaren Visioning Plan. The primary goal is to determine how to spend millions of dollars allocated under a 2012 bond, and to set up future projects for future bond.

Trails for hikers and mountain bikers have been a top request in every single survey of the park, including ones taken in 1983, 2004, and 2016. This preference is reflected in the current plan, where trails are a key feature.

The trails plan in the McLaren Visioning Plan has four goals and three main components. The goals include safety, natural character, protecting natural resources, and clarifying circulation. The components consist of a pair of ‘primary’ main loop routes around the park, ‘secondary’ important connections, and ‘tertiary’ additional trails which are used for fun. The plan includes about miles of routes, of which a few are designated for bicycles.

The Future of Riding trails in McLaren
In keeping with the community’s repeated preference in surveys for trails open to biking, SF Urban Riders believes that there needs to be enough riding in the park open to cycling to make it interesting and valuable for multiple types of users. That means enough miles of bike-friendly trails to create several loops, with a significant amount of challenge, closeness to nature, and playfulness. In particular, the Visioning Plan should retain the existing trails which have been built for this purpose, improve them, as well as create a few new bike-friendly trails.

SF Urban Riders believes that the following needs must be met to honor the public’s preference for providing ample trails for riding bicycles:

We’re happy with much of the current vision plan, as it provides several loops and trails. We believe the priority projects are important to fix ongoing issues. However, there are a few areas of concern.

We have also outlined these in our note to the commission about approval: McLaren-Vision-Plan-SFUrbanRiders.pdf

Regardless of the issues we’ve outlined, SF Urban Riders is ecstatic to see progress and look forward to continuing to contribute to McLaren Park. 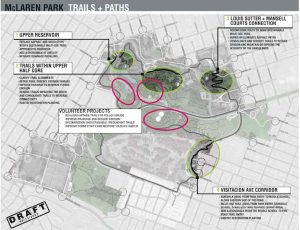 To see a map we have created based on the park and their information, see the SFUR version of the Visioning Plan map 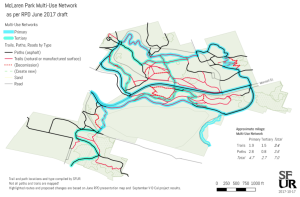 This plan was approved by the Rec Park commission on November 16th, 2017.

This is good news, as this approval legitimizes bike access through much of the park. The next step will be for the department to create more detailed designs for the trail improvements in the areas identified as priorities. We’ll keep you informed.

via our partner: SF Parks Alliance

Find us on Social Media